The turmeric (Turmeric or Curcuma longa) has been used for its healing properties for 4,000 years in the Vedic culture of India, when Turmeric was the main spice, also possessing religious significance.

In the Greek-Arabic medicine of the 1st Ad. century, based on the teachings of Hippocrates, Galen and Abitsianou and in the four tampermints of Ayurveda, Turmeric was used as a bile duct in jaundice, as well as externally in ulcers and inflammations.

Today, turmeric is widely used in cooking and is a key ingredient in the curry mixture (in 20-30%), from where the flavor and yellow color of the mixture comes. It is also used in mustard and in the coloring of some butters and cheeses. As a food additive it has the code e 100.

The turmeric comes from the rhizome of the Curcuma Longa plant, belonging to the family of Zingiberaceae and is native to tropical regions of South Asia. Its root has a strong bitter taste and orange yellow color.

The turmeric is also found with other names such as turmeric, Yellow-Root, Gold-Root. Turmeric has a significant nutritional value because it is rich in fiber and nutrients such as manganese, iron, copper and potassium.

In the genus Curcuma distinguish more than 36 OIDs, of which the most important are the following: 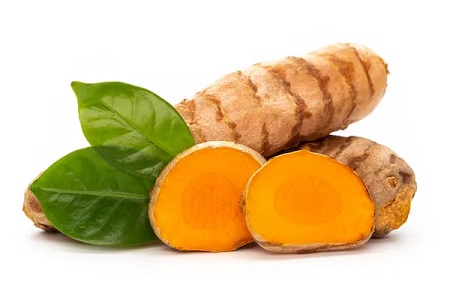 According to recent research, turmeric or curcumin intake, a natural pigment contained in turmeric, benefits in:

According to studies, turmeric is safe when taken orally or applied to the skin for up to 8 months.

Turmeric usually does not cause any significant side effects. However, some people may experience stomach upset, nausea, dizziness, or diarrhea. Turmeric consumption is contraindicated in the following cases:

Turmeric is available in spices-herbs, organic products and some pharmacies, in the following forms:

According to scientific studies, for adults the daily dose of turmeric, when taken orally, is:

Not recommended for young children under two years of age. Turmeric supplements have not been studied in children, so there is no recommended dose. For older children and people over 65 years, start with a low dose.

According to research, Piperine which is the active ingredient of black pepper significantly increases the bio-availability of curcumin by 2000%.

Uses of turmeric in cooking

If you are looking for more Super-Foods that will help you live longer and healthier, check this list from FoodNurish.com

What Countries Are Famous For Sausages? Who Loves a Good Banger?

HOW TO PROMOTE YOUR HOME BAKERY BUSINESS & GET MORE EXPOSURE

Are You Looking For The Best Halal Cafés In Singapore?